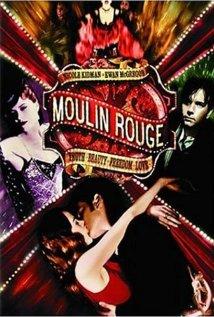 Is just to love

And to be loved in return.

These haunting lyrics from Nat King Cole’s “Nature Boy” weaving their way through Baz Luhrmann’s “hallucinogenic fairy tale” (James Berardinelli), assure us that, whatever else the dazzling and exhausting spectacle of Moulin Rouge may entice us to believe, it is a classic and simple love story. This romance explodes with operatic flair and surges with all the musical passion of Orpheus descending into the dark underworld, pouring out all his persuasive melodies to rescue Eurydice from death. But the first words of the story appear on paper, the typed memories of the writer and idealist, Christian: “This is a story about loveÉ and a boy who wandered so very far from home.” And he tells us the whole story in 6 words: “The woman I loved has died.”

Moulin Rouge is Luhrmann’s third major film (Romeo+Juliet, 1996; Strictly Ballroom, 1996). With his wife, Catherine Martin (production and costume designer), Luhrmann uses every penny of his $53 million budget to create an extravagantly energetic musical. Yes, this is a musical, but it’s not the Sound of Music even though you will hear “The Hills Are Alive.” You’ll also hear “Roxanne,” “Diamonds Are a Girl’s Best Friend,” Madonna’s “Material Girl” and “Like a Virgin,” the Beatles’ “All You Need Is Love,” U2’s “In the Name of Love,” Dolly Parton’s “I Will Always Love You,” Elton John and Bernie Taupin’s “Your Song,” and more–all songs of the 20th century, set in 19th century Paris, told in a film that could only belong to the 21st century. Kevin Maynard of Showbiz describes the film as “a postmodern fantasia — it’s impossible to come away feeling like you’ve ever seen anything quite like it.”

Experiencing Moulin Rouge is “like being trapped on an elevator with the circus,” exclaims Roger Ebert. The roller-coaster ride jolts to a stop, you sit paralyzed in terrified awe, and you force out the words, “I want to go again.”

The Moulin Rouge (“the red mill”) of Paris, 1899, was a gaudy icon of Bohemian independence and decadence. The night club chorus line popularized the Cancan while the clientele imbibed the dangerously beautiful absinthe. The Moulin Rouge of history paraded an endless spectacle of distractions and enticements, luring in the bored, the lonely, and the disillusioned with the promise of even greater spectacle — Spectacular, Spectacular! (the name of the play Toulouse Lautrec persuades Christian to write for the woman he loves). The Moulin Rouge seduces with the assurance that the burdens of the real world can be checked at the door. In this whirling frenzy of distracted self-indulgence, Luhrmann brings together Satine (Nicole Kidman) and Christian (Ewan McGregor) under the dizzying spell of Zidler (Jim Broadbent), the ringmaster impresario of the pleasure palace. Satine is the jewel of the Moulin Rouge, aspiring to be more than a showgirl and courtesan. Christian, the aspiring but penniless writer, believes in “truth, beauty, freedom and love” above all else — and he believes his words will set his love free. The opportunity to break free of their worlds lit in the red (Satine) and blue (Christian) lights of their respective stages is illuminated by the natural light of the real world which they discover in the presence of each other’s love.

With the self-conscious, medium-awareness of theatrical innovator, Bertolt Brecht, Luhrmann does not want us to forget that we are watching a film. The opening view draws us through the stage proscenium, past the flickering sepia of antique film, over the model city of Paris with the tilting illuminated windmill, into the staged world of the cabaret. The stage-set rooms, the artificial perfection of the night sky, the outlandish pushing for center stage by the characters (often mugging for the camera), the washes of colored theatre lighting, all remind us that we are watching a film and that the film itself is an icon, a fairy tale, a life within a dream upon a stage all captured on film.

Luhrmann has given us a device so wildly artificial yet filled with sights and sounds that are at home in any century, that what is true and enduring shines through with amazing clarity and brilliance. Genuineness amid superficiality. Sacrifice in the face of extravagance. Selflessness against the backdrop of indulgence. Love triumphing over selfishness. Weighing the value and joy of a lasting and noble ideal against a fleeting adoration that dissolves into the anonymity of passing fancy – the eternal vs the temporal. Gently strengthening the contrast between authenticity and artificiality, Kidman and McGregor actually sing their own songs, and carry the music along with their roles with great strength and resilience. The anachronisms in the way Luhrmann tells the story as we listen to so many voicesÉ so many voices familiar to us, beg us to ask of our own lives – what do we really love and what do we value as real, noble, and true? What do we love, and what are we willing to give for the sake of love? What do we hold onto as timeless and let go of as passing? In what world do we live, the artificial stage of feigned adoration or the painful world of genuine love.

The questions which Moulin Rouge asks are classic and timeless, but the way it asks them is extraordinary. Of this you can be certain: this film is not a casual moviegoing experience.