The House Interview with Ellie Larson 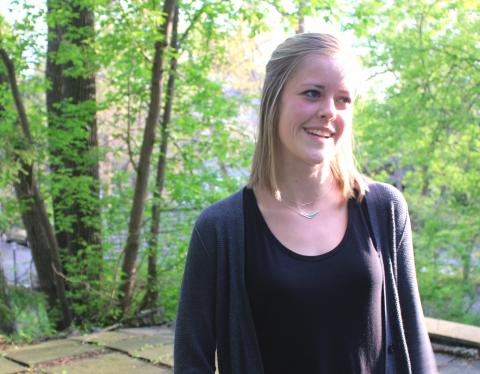 We all have expectations, and when Ellie Larson moved into Sophia House in August 2016 her expectations seemed reasonable. Fresh out of an undergraduate program at Whitworth University in Spokane, she expected her new Cornell PhD studies would be demanding, but she was excited to begin. She had previously lived for two years in a house with other Christian women. Based on that experience, she expected to gradually become friends with her Sophia House roommates. She anticipated sharing meals, conversations, living chores, and one bathroom per floor. She expected she would eventually find a church community. She expected she would enjoy Ithaca and the surrounding countryside, even if it was far from her close-knit Seattle family.

Ellie – energetic, quick to laugh, a bright presence – never expected when she arrived on campus that a January accident would leave her concussed and flat on her back in a quiet, darkened room for several weeks. She never expected dropping out of classes for a whole semester; she had barely begun. Nor did she expect the crucial role fellow students, Sophia House roommates, and her church small group would play in her recovery.

This interview took place as Ellie’s unforeseen first year of graduate studies came to a close.

How did you find yourself at Cornell?  Was coming here part of your plan?

I’m getting my PhD in biomedical research. I’m in the Vet School, but I’m not here to become a veterinarian! I’m in immunology, studying allergies specifically.  I had been looking at several schools. Cornell was not on my list. I had applied to six programs, but my undergraduate advisor thought I should apply to seven. I came across Cornell because of a handful of professors doing allergy research. I was like: Cornell is in New York. I live in Washington state. I want to go to the University of Washington (UW). I love the city. I would be close to my family. I don’t want to move across the country. But I was accepted at Cornell pretty quickly and had an interview here, and I really liked it. The professors were a big pull and I liked the way the program is structured; it’s a really good fit for me. I had this really unexplainable pull to Cornell, like a sense from God, almost. I interviewed at UW as well, but I didn’t like the program as much. It was frustrating because I wanted to go there so badly, but it just didn’t sit right with me. In the end, I was rejected by UW. My parents were sad, but I was relieved because I didn’t have to choose.

What prepared you for living in Sophia House?

I grew up in an amazingly strong Christian family, which I think set an example for me to seek after and want to live in a Christian environment. I did not go to Christian schools when I was young and I wasn’t very involved with youth groups or other Christian groups in high school. I don’t think I was that comfortable with myself until I was in college. But going to Whitworth, which is a Christian institution – though you don’t have to be a Christian to go there – and seeing the value of having strong Christian friends, and experiencing that interaction, changed my perspective. By the time I came here I badly wanted to be surrounded in my home by Christians. The sciences are not a hub for that kind of community. It was important for me to come home to people who have a faith similar to mine and who are making similar decisions in their lives.

What has living at Sophia House been like for you?

We have a retreat at the beginning of each semester. We share house chores and we sometimes wind up eating together during the week. Every other Sunday night we have dinner together here, which we cook. The other Sundays we eat with the guys at Chesterton House. We eat and then do some sort of shared activity – a discussion or reading or something like that.

What have been some of your biggest challenges since coming to Cornell?

I slipped one night last January on ice.  It was dark, the roads were very icy, and my face was all swollen. I didn’t know I had a concussion for about 12 hours. The next morning, I showered, and drove to work at the lab. The lights in the lab are fluorescent, and once I got there I started feeling sick. I was dizzy and nauseous. I saw a doctor, and then I went home to Sophia House, where I was pretty much out of commission until sometime in April. I slept for almost all of January and February. I had no energy and a really bad headache all that time, and I was on painkillers and sleeping meds. Other than someone driving me to doctor’s appointments, I did not leave the house at all for eight weeks. I thought about going home to Seattle, but flying is bad for concussions. My parents thought about coming here, but I was too exhausted to have them around.

How did you survive?

The fact that I moved here, had a major crisis a few months later that left me unable to do anything for myself – the support I had was amazing.  I was the only person in Sophia House in January; the other students were away.  Barb Westin, a ministry staff person, was very helpful. Ironically, she is still recovering from a concussion she suffered in a fall about three years ago. She knew from her own experience to check in on me and be available. She’d say, “Ok, I’m here to pray with you and do whatever you need and then I am leaving because I know you can’t handle me any longer.  If you need to be in your darkened room the whole time I’m here – with the door closed – that’s fine.”

Once I became more cognizant, it was really nice to be here, in Sophia House, with the other girls. They were the best with social interaction. They helped keep my morale high, and I needed it. I had been in the lab most of my first semester. Now I was always here. I was here when they left in the morning and here when they came home. I was able to interact with everyone and get to know them better.  Even though I felt terrible for so long, having the girls here wound up being the best thing – having people to socialize with.

Do you have any tips for potential Sophia House residents?

You kind of have instant friends when you come here, and it can take a little time to adjust. But just by living in the same house – sharing bathrooms and figuring out kitchen space, etc. – you slowly get to know one another. You go beyond having roommates to having a whole house of people who are your friends. And you kind of inherit the guys at Chesterton House as well. It’s really nice to have a community, a group of people you are part of. I’ve learned so much being here, heard so many conversations about different topics people are studying. You don’t have to work to make yourself be a part of it, you are inherently a part of it.